We are so happy you’re here. Access each day’s presentations using the left navigation.

Enjoy access to the most popular presentations from the Trauma Skills Summit for a limited time.

This event has concluded … but you still have time to own all this content! 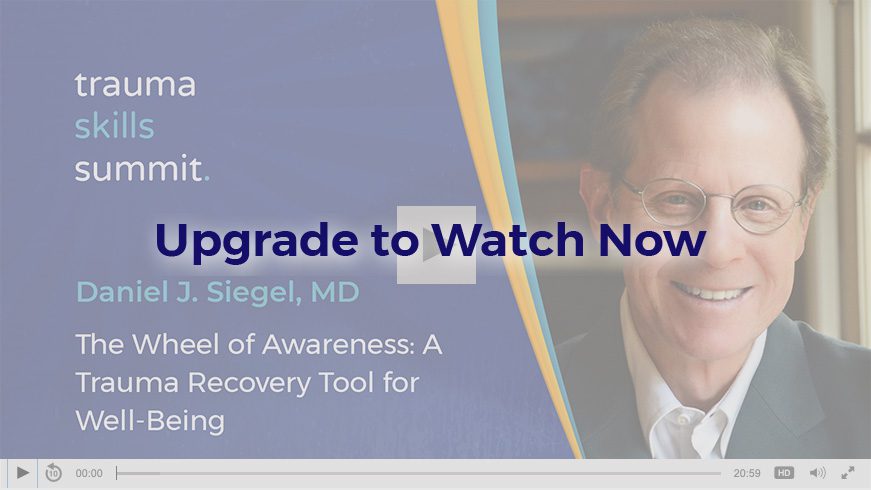 The Wheel of Awareness: A Trauma Recovery Tool for Well-Being

Explore the mechanisms of the mind with Dr. Daniel J. Siegel in this fascinating interview—including how the “mind” refers to a lot more than just the brain. Dr. Siegel introduces us to the Wheel of Awareness, a tool for consciousness integration that has been shown to improve well-being and trauma recovery in thousands of patients. You’ll discover how both integrating and differentiating various parts of our mind and experience can support healing, as well as the importance of being able to access states of pure awareness.

Dr. Daniel J. Siegel serves as the director of the Mindsight Institute and codirector of the UCLA Mindful Awareness Research Center. A graduate of Harvard Medical School, he is the author of The Mindful Brain and Parenting from the Inside Out. His internationally acclaimed bestselling text, The Developing Mind, has been utilized by a number of organizations including the US Department of Justice, the Vatican, and more. Dr. Siegel is the founding editor of the Norton Series on Interpersonal Neurobiology. 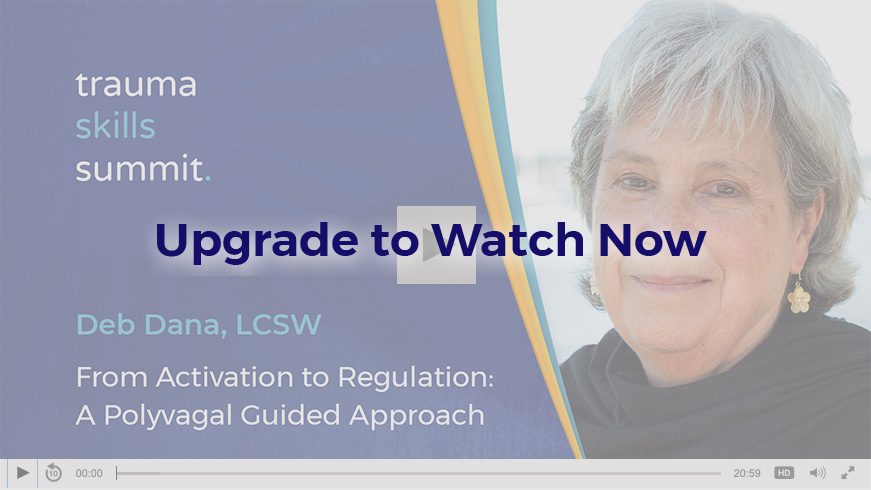 From Activation to Regulation: A Polyvagal Guided Approach

Deb Dana, LCSW
Author of The Polyvagal Theory in Therapy

When we feel threatened, our defenses go up and our ability to regulate our nervous system seems to go out the window—as a result, our trauma responses can get stuck in our bodies. Polyvagal theory helps us understand the ways trauma shapes our nervous system—and therefore see the pathways that can lead us back to healing. In this session, you’ll look at the cues that activate a survival state and explore ways to engage the natural resources of the autonomic nervous system in order to return to regulation.

Deb Dana is a clinician and consultant specializing in working with complex trauma. She is a consultant to the Traumatic Stress Research Consortium in the Kinsey Institute and clinical advisor to Khiron Clinics. She developed the Rhythm of Regulation Training Series translating polyvagal theory into clinical application and lectures internationally on how to bring a polyvagal-informed approach to therapy. Dana is the author of The Polyvagal Theory in Therapy: Engaging the Rhythm of Regulation and Polyvagal Exercises for Safety and Connection: 50 Client-Centered Practices, creator of the Polyvagal Flip Chart, and coeditor, with Stephen Porges, of Clinical Applications of the Polyvagal Theory: The Emergence of Polyvagal-Informed Therapies. Her Sounds True audio program, Befriending Your Nervous System, is due to be released in summer 2020.

Please log in again. The login page will open in a new tab. After logging in you can close it and return to this page.

Can I participate in an Inquiry discussion group?

The Diamond Approach is offering live, online Inquiry groups to accompany this course at a discounted rate — $100 for eight, 90-minute sessions, where you’ll take turns with other students working one-on-one with an expert teacher. This is completely optional and available after purchasing Presence.

How do I purchase Presence: Venture into the Heart of Enlightenment?

You can purchase it here.

How do I access Presence: Venture into the Heart of Enlightenment after I have purchased it?

What browsers do you recommend?

We recommend the most recent version of Safari for Mac users or Google Chrome for PC users (with a second choice of Firefox). We do not recommend using Internet Explorer—but if you must, please use version 11 or higher.

To access Realization Unfolds: A Conversation between A.H. Almaas and Adyashanti, you will need to:

I already have the bonus in my library. Can I substitute it for something else?

Unfortunately, it is part of the bundle, and substitutions are not allowed.

You can download the audio/video content onto your computer or Android mobile device. With the exception of eBooks, Apple has restrictions that prevent items from being downloaded directly to iOS devices, unless purchased from iTunes or Apple. Digital items may be downloaded to your computer and then synchronized to your iOS device via iTunes. Courses are also available to stream within the Sounds True App.

Can I stream the live sessions from a computer or my mobile device?

Live sessions are viewable on Mac and PC. You can stream them on Android and Apple mobile devices through the browser. If you are not using WiFi, please check with your mobile carrier, as additional data rates may apply.

How do I know what time live sessions start if I live abroad or in a different time zone?

All events are Eastern Time unless otherwise noted. Here is the schedule. Please use a time zone converter of your choice or thetimezoneconverter.com.

Why is the video player blank, or why can’t I hear it?

Are the sessions live or prerecorded?

The course videos are prerecorded. Videos noted as “Live” are live.